Baseball is one of the biggest economic drivers in Southwest Florida. From amateur league baseball tournaments that bring players, families and spectators from all over the country to Fort Myers, to Major League Baseball spring training games that welcome hundreds of thousands of fans to Hammond Stadium and JetBlue Park.

Even amidst COVID, tournaments like those of Perfect Game, the national youth baseball organization, helped drive hotel occupancy throughout the City during the summer months. Over the previous five years, Perfect Game has held an average of 41 events per year in Lee County. This activity resulted in an average of $29.6 million in direct spending per year with an annual average of 67,846 hotel room nights filled, according to county records. At one point in time, these tournaments would sell out every hotel from Sarasota to Marco Island.

Sports tourism has been on the upswing, and proving critical to our economy post pandemic. But what’s truly in store for Baseball Americana in Southwest Florida?

TO VIEW THE VIDEO OF THE PROGRAM, CLICK HERE 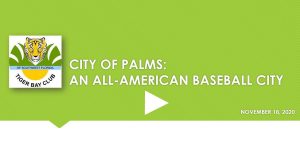 We remain committed to bringing you informative, bipartisan content on social, civic and political issues. Stay tuned for the latest updates surrounding issues facing our local government and Southwest Florida.